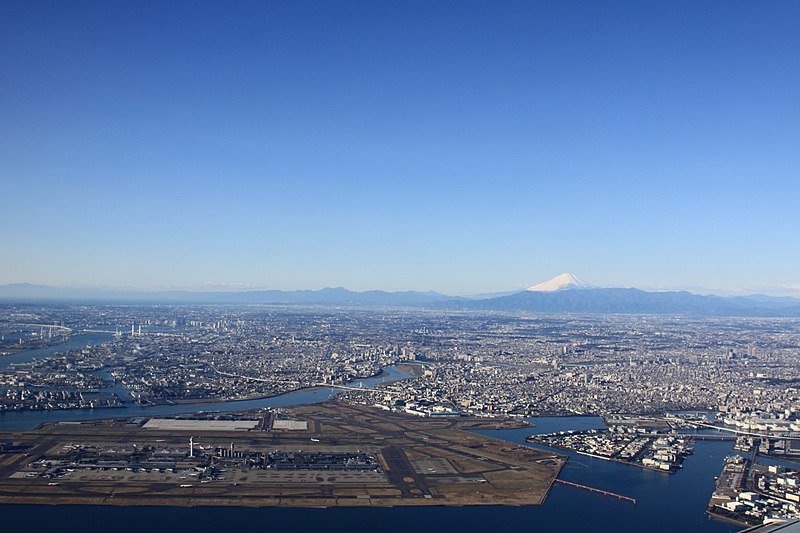 Haneda Airport (羽田空港 Haneda Kūkō) (HND  IATA), officially known as Tokyo International Airport (東京国際空港 Tōkyō Kokusai Kūkō), in the Tokyo neighborhood of Ota, is the largest and busiest airport in Japan, and the second busiest airport in all Asia despite the majority of flights being domestic. Although Narita Airport has been Tokyo’s main international airport since it opened 1978, with Haneda serving primarily as a domestic airport, the Japanese government has been opening Haneda up to more international flights since the opening of the new International Terminal in 2010. Since then, Haneda has won numerous accolades, having been awarded a 5-star rating by Skytrax since 2014.

Haneda is known for its entertainment districts: Edo Market (an imitation of an ancient Tokyo street with stores and restaurants) and Tokyo Pop Town (a shopping and entertainment district including Japanese-themed stores, a planetarium, slot car racing, flight simulators, and an observation deck). These are located landside, so you can visit them even if you don’t have a flight. There is also a replica of the famous Nihonbashi bridge in central Tokyo. The downside is that if you are changing flights, you will have to pass through customs and immigration in order to visit these.

Haneda has two domestic terminals (known by numbers) and an international terminal.

As Haneda operates a large number of domestic flights during the day, many international flights used to be restricted to late night or early morning arrivals and departures. While this is still the case for some flights, Japanese aviation authorities are now offering more daytime slots for international routes in an effort to increase tourism, especially as the 2020 Tokyo Olympics approaches. Passengers can now fly into Haneda from such cities as New York, San Francisco, Toronto, London, Paris, Frankfurt, Dubai and Sydney, in addition to many other cities around Asia.

The easiest and most scenic way from Haneda to the city is the Tokyo Monorail running to Hamamatsucho for ¥490, from where you can connect to almost anywhere in Tokyo on the JR Yamanote line. The monorail has a station at each of Haneda’s three terminals. From the International Terminal, trains reach Hamamatsucho in as little as 14 minutes on the nonstop services; the domestic terminals are about 5 minutes farther down the line. JR East maintains a Travel Service Center for foreigners in the International Terminal (open daily 7:45-18:30) where vouchers can be exchanged for the Japan Rail Pass and JR East Rail Pass, and where JR Kanto Area Passes can be purchased. The Tokyo Monorail is fully covered with any of these passes.

The other alternative is the private Keikyu (京急) line, which has two train stations at Haneda: one for the International Terminal and one serving both Domestic terminals. Keikyu trains run to Shinagawa (15 min, ¥410) and Yokohama (30-35 min via Airport Express [エアポート急行], ¥450). Some Keikyu trains from Haneda continue on to the Toei Asakusa Line, providing one-seat rides to the Ginza district (30-35 min to Higashi-Ginza, ¥560) and Asakusa (40-45 min, ¥610), with some of those even continuing onto the Keisei Main Line all the way to Narita Airport (100 min, ¥1760). Note that Keikyu fares quoted here are from the International Terminal station.

JR Passes are not valid on Keikyu Trains. If your final destination is somewhere along the Tokaido Shinkansen (i.e. Odawara, Atami, Shizuoka, Nagoya, Kyoto, Osaka) then you may want to consider using the Keikyu Line to Shinagawa to pick up the shinkansen, even if you have a Japan Rail Pass. Using the Tokyo Monorail will require you to take an additional train, the Yamanote Line, to either Tokyo station or Shinagawa.

Limousine Buses connect Haneda Airport with Narita Airport (90 minutes, ¥3,100) as well as main rail stations and hotels around the city. Most Airport Rapid Express [エアポート快特] trains on the Keikyu Line also run all the way to Narita Airport’s terminals; these services are much cheaper than the bus (105 minutes, ¥1,750), but buses operate more frequently. Note that the “Airport Terminal 2” station that pops up in some route search engines refers to terminal 2 at Narita Airport, not Haneda!

If you need to transfer between Narita and Haneda airports, be sure to give yourself at least 5-6 hours of connection time between your flights so you have ample time to make the transfer.

If you arrive on a late flight or need to catch an early flight, beware that there are no trains between 23:59 and 05:00 on either the monorail or the Keikyu line. Some limousine buses do operate after midnight, but such trips incur an additional “night surcharge”.