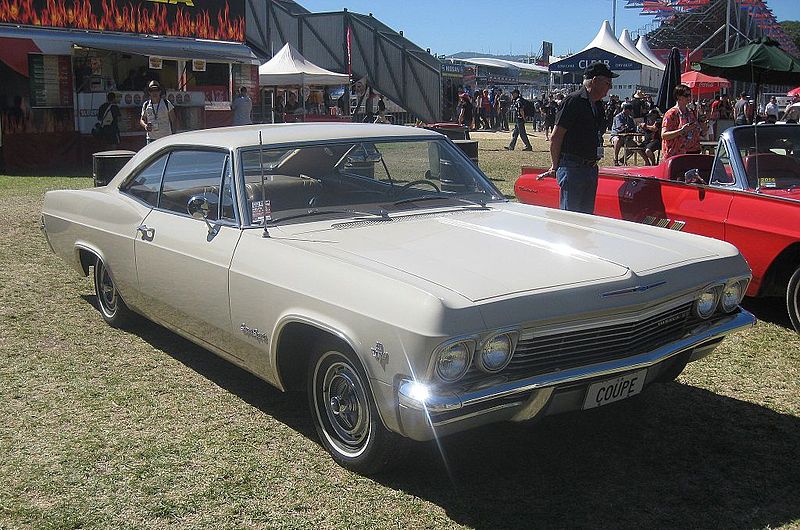 The Chevrolet Impala (fourth generation) are full-size automobiles produced by Chevrolet for the 1965 through 1970 model years. The 1965 Impala was all new, while the 1967 and 1969 models featured new bodies on the same redesigned perimeter frame introduced on the 1965 models. All Impalas of this generation received annual facelifts as well, distinguishing each model year. Throughout the early 1960s, Chevrolet’s basic body designs became increasingly subtle, while the bright trim that was part of the Impala package added more than a touch of luxury to the look. The same pattern was followed in the interiors, where the best materials and equipment Chevrolet had to offer were displayed. In short, the Impala was on its way to becoming a kind of junior-grade Cadillac, which, for both the company and its customers, was just fine.[5]

Totally redesigned in 1965, the Impala set an all-time industry annual sales record of more than 1 million units in the U.S.; which has never been bettered. The new full-size Chevys featured dramatically rounded sides, and an all-new front end with new hood contours, curved, frameless side glass (for pillarless models), and sharper angled windshield with newly reshaped vent windows. Sport Coupes wore a sleek semi-fastback roofline, and wheel well moldings were revised. Chevrolet promoted the cars’ Wide-Stance design, adhesively bonded windshield, and improved full-coil suspension. A two-tone instrument panel put gauges in a recessed area ahead of the driver. The “X” frame was dropped for a new Girder-Guard full-width perimeter frame which reduced the size of the inside driveline tunnel and redesigned suspension. Two-range Powerglide, as well as Synchro-Mesh 3- and 4-speed manual transmissions were available. The Turbo Hydra-Matic automatic transmission was offered for the first time. As with previous years, Impalas featured more chrome trim inside and out, with pleated tufted upholstery and door panels plus simulated walnut trim on the lower instrument panel.

Engine choices included the inline six-cylinder as well as the famous Chevy small-block and big-block V8s. Automatic transmission buyers were given the option of the newly introduced three-range Turbo Hydra-Matic for the newly introduced Mark IV big-block engine, displacing 396 cubic inches. The old 409-cubic-inch (6.7 L) “W” engine was discontinued early in the 1965 model year, so early-production ’65s got the 409, available only in four-barrel 340 and 400 horsepower options. The new 396 Turbo Jet V8 was the first General Motors engine to receive the Rochester Quadra-Jet four-barrel carburetor that would become a mainstay until the early 1980s. The new 396 was available as a 325-horsepower version with 10.25 to 1 compression ratio and hydraulic lifters or a high-performance version with 11 to 1 compression ratio, solid lifters and 425 horsepower.

For $200, an Impala four-door Sport Sedan could be transformed into an Impala Caprice establishing a name destined for decades of life. Referenced as Regular Production Option Z18, the Caprice option group included a black-out grille, vinyl top with Fleur de lis emblems, unique wheel covers, and narrow sill moldings. The new interiors were the most luxurious ever seen in a Chevrolet, and an array of comfort/convenience features. Specially stitched cloth door panels were accented with simulated walnut, and contour-padded seats wore a combination of fabric and vinyl. All of this aimed to give Chevy buyers a “one-of-a-kind” taste of Cadillac’s look and ride. Its sales success prompted Chevrolet to make the V8-only Caprice a full series for 1966.