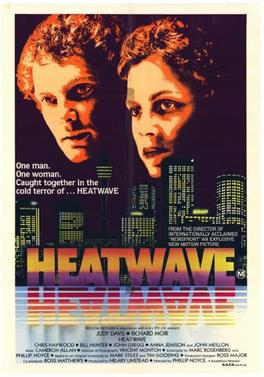 Heatwave is a 1982 Australian film directed by Phillip Noyce based on the murder of Juanita Nielsen. It was the second of two films inspired by this story that came out around this time, the first being The Killing of Angel Street (1981).

Around Christmastime, a heatwave hits Sydney and an architect undertakes a controversial project.

Heatwave was the story of a working-class Protestant boy who made good. I don’t know whether audiences realised that, but we had always assumed that he was a working-class Protestant and that Judy Davis’s character was a middle-class Catholic girl. She, in the Catholic saintly tradition, had adopted a social cause – had set herself up as the spokesperson and protector of the working class. He, as a working-class boy, of course, was now forced to confront the moral implications of his own success and how that affected other people. In a way, the religious and ethnic backgrounds of the two characters were just a continuation of the conflicts that we had seen in Newsfront, but Australia had by this stage moved from a principally working-class and upper-class society to a principally middle-class society. That’s captured in the atmosphere of inner Sydney, its buildings and the regulations of law and government.[3]

Reflecting on the film Noyce said:

I’d have no doubt shot it differently … told the story differently, today… Maybe that’s because I’m more conservative. I might have made the connections between the conspirators more certain, rather than implied. Heatwave belongs to a different era in Australian cinema, a time when we took a lot risks. I guess that comes with youth – the youth of the director and the youth of that second new wave of filmmakers. It was a time when there was a love affair between audiences and Australian cinema, something which these days is rather on and off.[1]