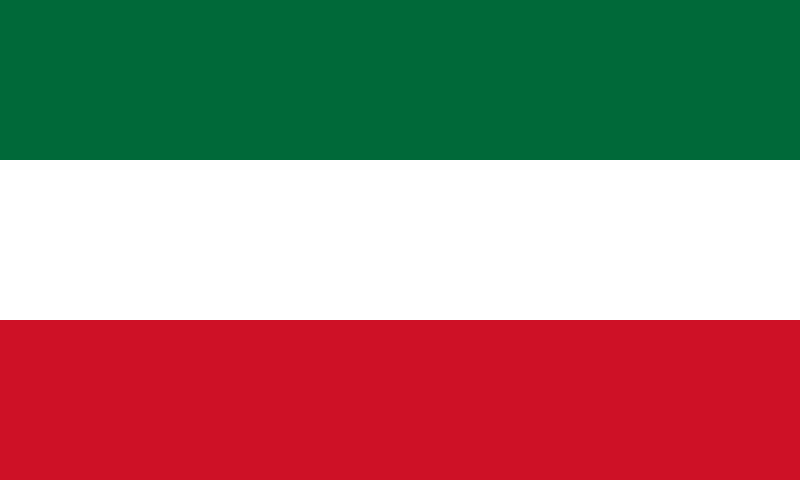 The Patriote flag (also known as le Tricolore canadien[1]) was utilised by the Patriote movement in Lower Canada (present-day Quebec) between 1832 and 1838.

The first incarnation of the Patriote flag was created in 1832 to represent the Parti patriote (Patriotes), which at the time was the largest Francophone party in the Legislative Assembly of Lower Canada.[2] Its first major public appearance was at the release of Ludger Duvernay and Daniel Tracey. Both men had been arrested for their criticism of the appointed Legislative Council and once they were released they were met by crowds flying the Patriote flag.[3] With their landslide victory in 1834, the Patriotes had control of the Assembly, which led the British government to call upon the new governor, Archibald Gosford to start an inquiry into the overall situation of the colony.[4] In response the Patriotes refused to vote on any budgetary measures in an attempt to paralyze the administration by freezing their expenses to run the courts and civil government. With the findings of the Gosford Commission deeming the assembly was not acceptable for the colony, Lord John Russell on the 2nd of March 1837 issued the Russell Resolutions to the Assembly.[5] With the outright refusal by the British to implement any of the Ninety-Two Resolutions and the hesitation of the Parti patriote to take up arms against the government, they instead resorted to organising demonstrations to further pressure the British into accepting their demands. It was through these demonstrations that the Patriote flag started to become associated with the reformist ideals of the party. On the 1st of June, 1837, the leader of the Patriotes, Louis-Joseph Papineau, attended a demonstration at Sainte-Scholastique in which a Patriote flag, adorned with a maple leaf, beaver, and muskellunge, was being utilised.[2]

Throughout this period other variants of the flag were utilised, two notable ones was one with a bald eagle with which had its wings open on a white star. The other one had a Canadian eagle in flight, holding a branch of maple leaves in its beak and pointing towards a star on a blue background, surmounted by the words “Our Future”.[6] This difference in the usage of British and American symbolism highlights the two significant factions within the Patriotes movement itself, the autonomists represented by Papineau who wanted greater self-governance for Lower Canada and the radicals represented by Wolfred and Robert Nelson who wanted full independence from Britain.[1] Whilst it would be easy to assume that the usage of American symbolism was an attempt at petitioning the United States for annexation, the usage of Canadian symbols implied that the Patriotes were attempting to building American sympathy for their cause whilst also showing. However it is highly unlikely that this was the case as many Americans would not have been able to see the flags being utilised and it is most likely just US symbolism being co-opted by the radical wing of the Patriotes.[1]

Seeing the increased popularity of the flag, the Montreal Herald on the 20th of October 1837 recommended the flag be destroyed.[7] Later that week on the 23rd of October at a demonstration in Saint-Charles, the Patriote flag was hoisted on the “liberty pole” alongside French revolutionary flags and other banners with messages such as “Liberty! We’ll Conquer or Die for Her,”.[2][8] With the failure of the Lower Canadian Rebellion, the Patriote flag eventually fell out of common use by the 1840s, with it being perceived as a symbol of revolution first and foremost instead as symbol of Canada. A vertical bi-colour version of the Patriote flag containing green and white was adopted by the Société Saint-Jean-Baptiste (SSJB) in 1842 but it did not enjoy the same success as its predecessor. By the mid 1840s it many people and organisations like the SSJB had abandoned almost all traces of the old flag in favour of the French tricolour which would lead to the re-emergence of fleur-de-lis within the French-Canadian community.[2] The Maple leaf would also go onto become a popular symbol for representing Canada