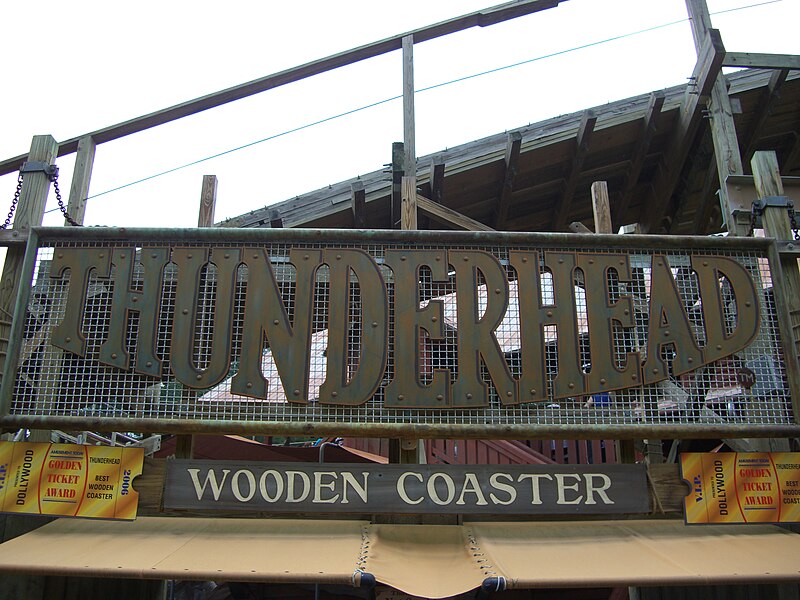 Thunderhead is a wooden roller coaster located at Dollywood amusement park in Pigeon Forge, Tennessee. Manufactured by Great Coasters International, the ride opened on April 3, 2004, as the anchor attraction of a new section added to the park that season called Thunderhead Gap. Thunderhead features 22 turns and 32 crossovers,[1] and utilizes GCI’s Millennium Flyer trains, which have been used on all GCI coasters since 1999.

On June 26, 2003, Dollywood unveiled plans for a third coaster addition to the park called Thunderhead for the 2004 season, following Tennessee Tornado, which opened in 1999.[2] Thunderhead officially opened to the public on April 3, 2004.[3]

The ride was named after Thunderhead Mountain, a peak within the nearby Great Smoky Mountains National Park that was heavily logged during the early 19th century.[citation needed] Thunderhead is a slang term in the American South for Cumulonimbus clouds.[citation needed]

The train exits the station and turns right. From there, it makes its way through a left turn and climbs the 100.4-foot (30.6 m)chain lift hill. Upon reaching the top, the train drops 100 feet (30 m) to the right at 53.7 miles per hour (86.4 km/h). Riders go through a right-handed banked turn after the drop. This is followed by a left-handed curve. Next, the train approaches a right turn, heading towards an on-ride camera, which takes photos of the riders. After a 180-degree right turn, riders go through a fly-through station element while traveling 40 miles per hour (64 km/h). The train makes a loud noise as it travels 8 feet (2.4 m) above the station. It then goes through a left-handed curve. A smaller airtime hill leads to a 270-degree helix. Riders then go through a right turn and a left turn before hitting the brakes. The train slowly turns 90 degrees to the right, passing by the transfer track. This is followed by a 180-degree left turn that leads back to the station, where riders exit the train.