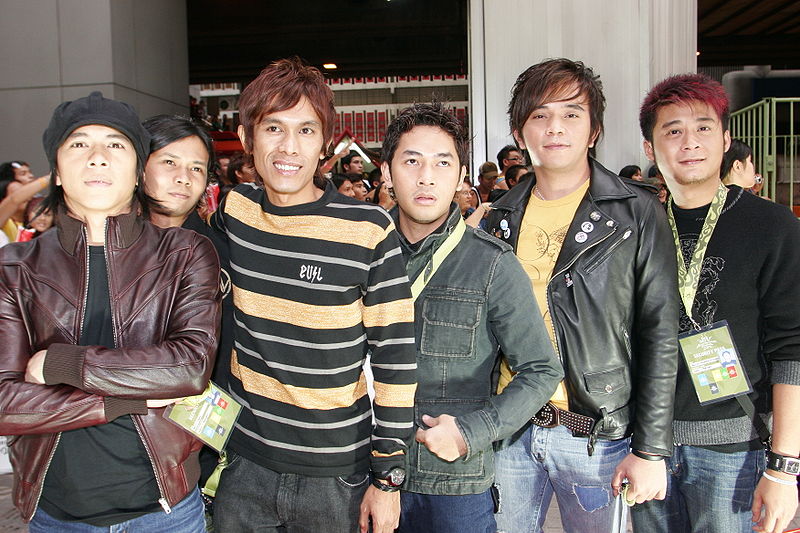 Noah (former name Peterpan and stylized as NOAH) is an Indonesianrock band that well known in Indonesia for their simple lyrics and catchy beats.[4] Founded as Peterpan in Bandung, West Java in 2000 by Ariel, Andika, Indra, Lukman, Reza and Uki. The band currently consists of Ariel, Lukman, and David.

Starting their career by playing in cafés, Peterpan gained popularity in 2002 after recording “Mimpi yang Sempurna” for a compilation album Kisah 2002 Malam, followed by a debut album Taman Langit in 2003. They gained further popularity in 2004 with their second album Bintang di Surga, which sold over three millions copies and won Best of the Best Album in Anugerah Musik Indonesia (AMI) among other awards. Their third album, a soundtrack album for the 2005 film Alexandria, also sold over a million copies. Peterpan have won various awards including two MTV Asia Award for Favorite Artist Indonesia. After Andika and Indra split from the band in 2006 and David joined in 2006, and later as a permanent member 2 years after, the band agreed to change their name in 2009.

The announcement of a new name was planned in 2010, but it was delayed because Ariel was arrested that year. After Ariel was released in 2012, the new name, Noah, was announced. Noah regained their popularity in 2012 with their first album, Seperti Seharusnya, which gained a huge success by selling more than 1.9 million copies in Indonesia and winning their second AMI Awards for Best of the Best Album. Reza split from the band in 2015, around the same time Noah released their second album, Second Chance, where they collaborated with Steve Lillywhite. Uki also split from the band in 2019 after the release of Keterkaitan Keterikatan album which won another AMI Awards for Best of the Best Album.

As of 2015, Noah has sold more than 9 million albums in Indonesia and is recognized as the best selling alternative pop/rock band in the country.[4] They are regarded as one of the most successful band in the history of Indonesia’s popular music. Three of their albums are included on the list of Indonesian all time best selling albums at #3 for Bintang di Surga, #6 for OST Alexandria, and #15 for Seperti Seharusnya.

In 1997, Andika Naliputra Wirahardja, a keyboardist, formed a school band in Bandung, Indonesia that called Topi, with Abel as bass player, Ari as drummer, and Loekman Hakim who joined the band after Abel invites. Lukman later asked his friend, Nazril Irham, to filling the vocals for the band after interested with Ariel’s voice. Ariel then proposed Mohammad Kautsar Hikmat as guitarist and Lukman approved it.[5]

Topi started to played in cafés, which they started in the B Club café as their first appearance. Topi also performed in some birthday party, independence day, and art festival. Uki, Ariel, and Lukman decided to left the band after seeing no vision on the band that leading Topi to broke up. Soon after Topi disbanded, Lukman later joined Bigfabela which consists several Topi’s man, while Ariel prepared for Ebtanas.

After graduated from high school, Ariel took a break for a year before going to college, a year after. While taking a break, Ariel requested to joined to Andika’s new band where he already known well. Uki and Ari, with addition of Hendra Suhendra (bass) and Nendy (guitar). The band later named Universe and was appeared in O’Hara café, Lukman later replaced Nendy due to his mismatch with the band and Ilsyah Ryan Reza, Indra’s bandmate in Second Act, taking Ari’s position after unable to following band’s performance.[6]

Andika regrouped former members of Topi in 2000, the drummer was replaced by Ilsyah Ryan Reza, a college student from Palu. Loekman Hakim, a friend of Indra’s elder brother, joined as their lead guitarist. Andika Naliputra Wirahardja suggested Peterpan as the name for the band referring to Peter Pan, the character created by J. M. Barrie, an author (other names they considered were Spiderman and X-Men). But according to Ariel, the name was taken from the name of a rabbit satay stall at the side road in Puncak, Bogor, that Andika and his mom visited while took a rest on the trip to Bandung from Jakarta.[7] The band was formally founded on September 1, 2000. Peterpan played on Bandung streets and gigged in cafés, with the goal of becoming a house band in one of the city’s cafés.[2] They often covered alternative rock and rock songs, (Nirvana, Pearl Jam, Coldplay, U2, Creed, etc.) at O’Hara and Sapu Lidi cafés.

While Peterpan performed as a Caffeine’s opening act at Sapu Lidi, Noey, Java Jive’s bassist, Caffeine’s manager, and producer who planned to release a compilation album that later known as Kisah 2002 Malam, spotted the band and asked them to filling a Musica Studio’s album compilation as a replacement for a band that left from the project after. Peterpan recorded three demo songs: “Sahabat”, “Mimpi yang Sempurna”, and “Taman Langit”. “Mimpi yang Sempurna” was chosen for the album. The album was commercially successful, selling a respectable 150,000 copies, and “Mimpi yang Sempurna” was given heavy rotation on Indonesian radio.

Peterpan later toured to a several cities like Malang and Makassar as a part of Kisah 2002 Malam’s promotion, that makes their first appearances outside of Bandung. While on tour, Peterpan covered several band’s song such Red Hot Chili Peppers and Radiohead, where their debut single, “Mimpi yang Sempurna”, performed as an encore. On December 2002, Peterpan made their television debut in Trans TV‘s first anniversary, “Setahun Melangkah Trans TV”.[8][9]

Musica Studio’s offered Peterpan a contract and released their debut studio album, Taman Langit, on June 2003. By releasing mega hits such as “Sahabat”, “Mimpi Yang Sempurna” on a piano version, “Aku dan Bintang”, “Semua Tentang Kita”, “Topeng”, and “Yang Terdalam”, their debut studio album instantly become hugely popular around the country and made them as superstars. The album has sold over 650.000 copies that making Peterpan reached a Multi Platinum Award.[10][11]